Dr. Roger W. Truesdail founded the Laboratories in 1931 and it remains a family-owned operation. Truesdail was established as an organization devoted to independent testing, consulting, inspection, research activities, and expert testimony. We employ over 50 scientists, engineers, technicians, and support staff, and occupy a 17,000 square foot facility in Irvine, California.

The Laboratories serve both government and industry in multiple scientific and technical disciplines including:

Truesdail Laboratories’ staff has worked in the area of racing chemistry for almost 70 years, analyzing tens of thousands of samples. Last year we analyzed thousands of biological specimens for the presence of drugs. In addition to testing race animals (equine and dogs), we test for horse shows and livestock shows and exhibitions. Truesdail utilizes state-of-the-art instrumentation, LC/MS and immunoassay, to provide highly sensitive screening and identification for a wide variety of compounds.

Truesdail has provided split-sample testing for nearly every racing jurisdiction in the United States as well as several foreign countries.

Since 2009 Truesdail Laboratories has been fully accredited to ISO/IEC 17025 for all parameters required by your testing programs and for the equipment used for the testing. Two (2) years ago (2014), we received accreditation from Racing Medication and Testing Consortium (RMTC). A copy of our certificates and scopes of accreditation is included in Section C.10 – Solication Section C.7. – Other Specifications and Stipulations.

Our staff’s experience in drug testing, coupled with forensic science, grants us the ability to give “expert witness” testimony at hearings and court cases. We have furnished expert witness testimony related to drug testing in Arkansas, California, Kentucky, Oregon, and Indiana for dozens of cases.

The following section outlines testing procedures used by Truesdail Laboratories for the analyses of blood and urine samples. Our procedures have been reviewed and accepted under our accreditions for IEC/ISO 17025 and RMTC.

Truesdail Laboratories will supply the containers for taking urine and blood samples. After samples are collected they will be sealed and labeled at the track by Oklahoma Horse Racing Commission personnel, then shipped to Truesdail for analysis. When the samples arrive, Truesdail’s personnel will check all seals and sample numbers against the chain-of-custody document and log the data into our computerized Laboratory Information Management System (LIMS). The chain-of-custody is maintained throughout our entire testing process. Whenever a sample(s) aliquot is handled, a log entry is recorded to document the activity.

Blood and urine samples will be opened, portions removed for analysis, the urine containers resealed with security tape, and then initialed and dated by the person who removed the test portions to maintain chain-of-custody. Subsequent removal of test portions will also be completed with this tape-resealing procedure.

Testing for drug control has been a changing process over its approximately 70-year history. Microcrystalline testing was used in the 1940’s and 50’s. This gave way to thin-layer chromatography that dominated testing until the 1980’s, when drug-specific immunoassays became available to improve sensitivity for many drugs.

By the 2000’s, high-performance liquid chromatography coupled with ion trap detectors (LC/MSn) and/or triple-stage mass spectroscopic detectors (LC/MS/MS) provided the most sensitive technology for drug screening. These technologies are still prominently used in many laboratories as a common screening method.

While LC/MS ion trap and LC/MS/MS triple-stage technologies are extremely sensitive, they have limitations. The number of compounds that can be screened is limited by the scan time; and the maximum number of compounds that can be sought in a single run is 200 to 250 without losing sensitivity. LC/MS/MS methods only screen for compounds pre-programmed into the method, and, once generated, the data cannot be re-examined to look for additional compounds.

UHPLC was made possible by the development of pumping systems that deliver much higher pressures to chromatography columns. High pressures allow for the use of more tightly packed and narrow columns. The net result is much higher resolution chromatography, sharper peaks, and in most cases improved sensitivity. Also, the time required to analyze a sample has been greatly reduced allowing more samples to be analyzed in a given timeframe. While UHPLC instrumentation is rather expensive, the high throughput of samples has allowed our lab to lower the cost for direct instrumental screening of samples.

Screening by HRMS has overcome the two main limitations of the triple-stage mass spectroscopy listed above. The number of drugs that can be sought in a single run is not limited by scan time or loss of sensitivity issues. The HRMS detector easily detects all unknown peaks and the instrument’s manufacturer has developed comprehensive software to help identify unknowns. Since detection criteria do not need to be programmed into the instrument before the analytical run is made, data collected from HRMS systems can be re-examined at any time after collection to look for new compounds once structural information is available. 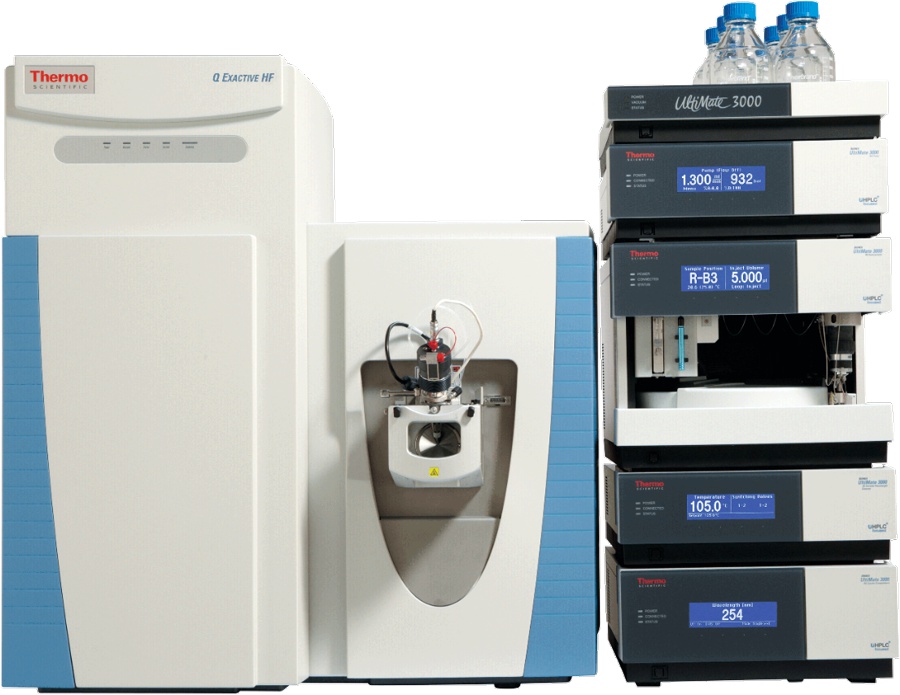 Since acquiring our first Thermo OrbitrapTM UHPLC/HRMS system, Truesdail began building a target list of compounds of interest to the racing community to be sought in each sample. We began with setting up our target list to include the total list of compounds required by the American Graded Stakes Committee and the list of compounds in ARCI’s (Association of Racing Commissioners International) uniform classification list. We have also included drugs targeted in human Olympic athletes, which could be used on horses. Our target list includes both parent drugs and known drug metabolites. Currently our target list has over 1,800 compounds and is still growing.

In 2011 our new UHPLC/HRMS screening technology was approved during our annual ISO/IEC 17025 audit and added to our scope of accreditation.

Because we expect to find many drugs to have been metabolized, urine samples are subjected to enzyme hydrolysis prior to extraction. Hydrolyzed urine is isolated and separated by solid phase extraction into acidic/neutral and basic fractions covering the same type of drugs as indicated for blood samples.

All ELISA kits depend on drug specific antibodies bound to plastic microtiter wells for detection of drugs. The characteristics of the antibodies attached to the wells of the plate determine which drug(s) the assay will detect. In most respects the kits are the same except for the antibodies in the wells and the drug that is used to coat the enzyme responsible for the color reaction.

Truesdail Laboratories currently runs all kits with at least two standards, even when the manufacturer does not specify quantitation. Quantitative data has allowed us to monitor the behavior of the assay and to validate detection levels on each plate.

ELISAs are currently run on a plate of 96 wells. Calibration samples, QA/QC samples and reruns require about 15% of the plate. Therefore, approximately 80 samples can be screened on a typical 96 well microtiter plate when no samples are pooled.